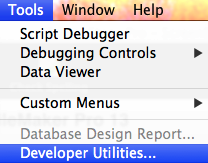 Wise old FileMaker developers always recommended that you physically secure your database on a server and not let anyone near it. In these days of Heartbleed hacker attacks and NSA snooping, no server actually seems very secure, so moving to a new level of file encryption appears to be an important step. That way, if the wrong people get access to your data file, they won’t be able to read the data without significant effort.

For an individual, hoping to increase the security of an unshared database running on FileMaker Pro, the encrypt/decrypt ability does not seem to add much over what can already be done with external tools, such as an encrypted disk image on OS X. or an encrypted .zip file. The encryption password is not tied into FileMaker Pro’s Security setup. Essentially, it just adds another level of password to the file. If a database administrator or developer wanted to distribute a stand alone database file, all recipients would have to be given the decryption password, in addition to their regular FileMaker Pro password.

FileMaker's engineers thought this one–the feature set and options make this a powerful tool in times when hackers are seeming to run wild.  Read it all.