How to Automatically Create Variables from JSON Data in FileMaker

Mislav Kos wrote an incredibly powerful, free custom function for parsing data from JSON files, something you'll definitely want in your tool chest for the future (as the future will include a lot of JSON for most developers).

If you have data stored as JSON, presumably you will want to extract it at some point. And as part of doing that, you may end up assigning that data to variables, whether for better script readability or other reasons. Adding these assignment steps to your script can be tedious, especially when the JSON document contains a lot of data. For instance, given the following JSON document that has key-value pairs for each letter in the alphabet, we would end up having to create 26 "Set Variable" script steps. 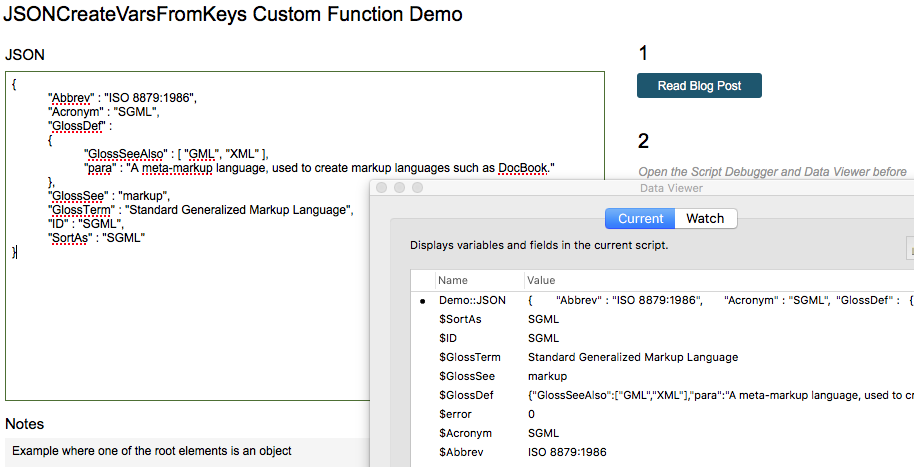 Features include handling arrays, typecasting data (dates are saved as dates, numbers as numbers, etc.), handling spaces, and more.  One of the worst parts getting data from web sources is mapping the data properly, mostly because it is boring and tedious.  This free FileMaker example file (at the link) helps relieve that boredom.

Source: How to Automatically Create Variables from JSON Data in FileMaker

I've never needed a scrollable check box in a popover before, but I have downloaded the free FileMaker example file, just in case:

Howard Schlossberg’s presentation on popovers (FileMaker 13 Popovers) has inspired me on multiple occasions… a favorite takeaway is the idea that you can have a scrolling check box set within a popover.

Bonus:  you can scroll other types of static fields, including container fields. More info at the link.

This was posted in May, but is still worth reading for a good overview of  WebDirect in FileMaker 16:

The FileMaker 16 platform includes FileMaker Server and introduces the ability to have multiple "worker" machines connected to a single FileMaker database server or "master" machine. This is mostly relevant to FileMaker WebDirect, which has greatly improved with the latest version.

This involves an understanding of the different services running as part of FileMaker Server, only one of which is the database server itself. There are also web publishing and scripting engines, among other services. Most important here is the Web Publishing Engine (WPE). That’s where WebDirect sessions are run from. FileMaker 16 introduces some changes to how WPE is managed in the FileMaker Admin Console.

The routing of clients to lower traffic hosts on the worker machines is worth noting.  So is the increased performance:  My clients WebDirect pages are waayyyy faster than the FileMaker client when run on the same machine.  It's embarrassing.  It's also often the best solution for the client.

We cannot put off living until we are ready.